Monterey is a mecca of cultural and historical diversity

Monterey (Spanish: Monterrey; Ohlone: Aacistak[11]) is a city located in Monterey County on the southern edge of Monterey Bay on California's Central Coast. Founded on June 3, 1770, it was the capital of Alta California under both Spain (1804 to 1821) and Mexico (1822 to 1836). During this period, Monterey hosted California's first theater, public building, public library, publicly funded school, printing press, and newspaper. It was originally the only port of entry for all taxable goods in California. In 1846 during the Mexican–American War, the United States flag was raised over the Customs House. After California was ceded to the U.S. after the war, Monterey hosted California's first constitutional convention in 1849.

Monterey and surrounding area have attracted artists since the late 19th century and many celebrated painters and writers have lived there. Until the 1950s, there was an abundant fishery. Among Monterey's present-day attractions are the Monterey Bay Aquarium, Cannery Row, Fisherman's Wharf, California Roots Music and Arts Festival, and the annual Monterey Jazz Festival. 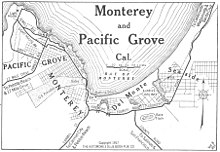 Colton Hall,[29] built in 1849 by Walter Colton, originally served as both a public school and a government meeting place.

Monterey hosted California's first constitutional convention in 1849, which composed the documents necessary to apply to the United States for statehood. Today it houses a small museum, while adjacent buildings serve as the seat of local government, and the Monterey post office (opened in 1849).[16] Monterey was incorporated in 1890.[16]

Monterey had long been famous for the abundant fishery in Monterey Bay. That changed in the 1950s when the local fishery business collapsed due to overfishing. A few of the old fishermen's cabins from the early 20th century have been preserved as they originally stood along Cannery Row.

The city has a noteworthy history as a center for California painters in the late 19th and early 20th centuries. Such painters as Arthur Frank Mathews, Armin Hansen, Xavier Martinez, Rowena Meeks Abdy and Percy Gray lived or visited to pursue painting in the style of either En plein air or Tonalism.

In addition to painters, many noted authors have also lived in and around the Monterey area, including Robert Louis Stevenson, John Steinbeck, Ed Ricketts, Robinson Jeffers, Robert A. Heinlein, and Henry Miller.

More recently, Monterey has been recognized for its significant involvement in post-secondary learning of languages other than English and its major role in delivering translation and interpretation services around the world.

In November 1995, California Governor Pete Wilson proclaimed Monterey as "the Language Capital of the World".[1]

Located on California’s dazzling central coast, Monterey promises a once-in-a-lifetime experience that residents enjoy every single day.  In Monterey, you can cruise along Highway 1 and gaze at the breathtaking view of the Big Sur coastline. After relaxing on beautiful beaches, explore the iconic Cannery Row, immortalized by author John Steinbeck, and experience the city’s rich history for yourself.  As the site of California’s first theater, public building, public library, publicly funded school, and printing press, there is no shortage of exciting ‘first’s’ to be proud of in your new hometown.

Not a fan of sitting still? Head to Pebble Beach to experience the 19th hole Golf Course or one of the many other iconic golf courses in Monterey. The city promises a life without boredom, boasting numerous shops and sea-food themed restaurants and bars converted from prominent factories.  Sip wine in one of the many wine-tasting rooms located in and around the city; just make sure to save surfing lessons for another day!

In the evening, the nightlife of the city reawakens a sense of wonder as you stroll through many city blocks of bars, restaurants, and live entertainment.

The best part of the whole experience? Knowing you can sleep beside the Monterey surf and awaken to the California sun to do it all again tomorrow.

Find a Home in Old Monterey

See All Neighborhoods
© 2023 MLSListings Inc. All rights reserved. Updated Jan 30, 2023 9:56:pm. Information deemed to be reliable but not guaranteed. The data relating to real estate for sale on this website comes in part from the Internet Data Exchange Program of the MLSListingsTM MLS.
Real estate listings held by brokerage firms other than the operator of this website are marked with the IDX icon

. The information being provided is for consumer's personal, non-commercial use and may not be used for any purpose other than to identify prospective properties consumers may be interested in purchasing.
Property information updated every 15 minutes. MLS search powered by Market Leader.